Plastic reduction gear box is a source of noise

First, the gear running vibration speed is too fast

Second, the load impact brought by the vibration of the gear

Here, the gear transmission is regarded as a vibrating spring system, and the gear naturally becomes a part of this system. When the gear is subjected to different degrees of load, the frequency of vibration, the direction of torsion will be different, most will form a circular direction of vibration. Add the gear itself to the problem of handling noise, and you get a smooth, non-screaming noise.

Three, the noise generated by resonance

Everyone knows that resonance can produce noise. As the main way of working in the production, gear transmission will naturally occur in the operation of resonance. The resonance brought by the gear transmission is based on the vibration caused by the rigidity difference of the gear itself and the vibration caused by the friction between the gears at the same vibration frequency, then the interaction between the two is easy to produce resonance, the noise brought by the resonance.

Four, part of the gear surface finish is insufficient

Five, do not choose the right lubricant

Selecting appropriate lubricants can significantly reduce friction and vibration between gears, and using high-performance lubricants is an important way to reduce and reduce noise. EccoGrease® High performance plastic grease is designed for use with a wide range of metal and plastic components using an antioxidant, low volatility synthetic base oil for a wide range of temperatures and long-lasting lubrication. EccoGrease® is used to lubricate all kinds of plastic gears and moving parts due to the addition of solid lubricants with low friction coefficients that provide excellent wear resistance and high load-bearing capacity.

The plastics used in plastic gears are broadly divided into two types: crystalline and amorphous. General crystalline and semi-crystalline materials include: nylon, acetalol, polyether ether ketone (PEEK) and polyphenylene sulfide (PPS), compared with amorphous materials such as polycarbonate and polyether imide (PEI), its fatigue resistance is better. Therefore, crystalline plastics are often used in environments requiring extremely high loads and stress cycles. Amorphous materials tend to be used in smaller, precise gears with lower speeds and loads. Adopt a more flexible wear-resisting material instead of hard wear-resistant material, to some extent, also can reduce the noise of gear transmission, such as plastic gear on, special engineering plastic wear-resisting mute gear to replace conventional POM, nylon material in improve wear resistance of fatigue resistance at the same time, can help to greatly reduce the noise of gear transmission. 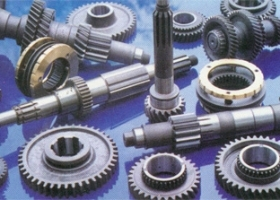 First, gear type has an impact on noise, helical gear noise is lower than spur gear

Different types of gears, due to their different geometric characteristics, will have different forms of engagement process. For example: under the condition of the same load and speed, through many application cases can be found that the noise of helical gear is 3 ~ 10dB lower than that of spur gear;

Second, the gear pressure Angle has an influence on the vibration level and noise frequency of the gear

In order to transmit a certain power, F must be fixed. If the pressure Angle A is increased, the normal force Fn of the tooth surface must be increased, which will increase the pitch line impulse and meshing impulse on the actual tooth surface with friction, thus leading to the increase of vibration and noise level. Although the center distance error of the gear does not affect the accurate engagement of the involute tooth shape, its variation causes the periodic variation of the working pressure Angle. For example: the eccentricity of the gear on the shaft, the rotation frequency of the gear will be changed to change its center distance, so it is bound to modulate the vibration and noise frequency of the gear transmission, the amplitude of the modulation will depend on the size of the eccentricity.

The gear teeth vary in different degrees when transferring load. In this way, the meshing impulse along the meshing line will be generated at the moment of entering and leaving the meshing, thus causing torsional vibration and noise. If the average number of teeth at the moment is increased, that is, the degree of overlap is increased, the load can be distributed on more teeth, so that the unit pressure of the tooth surface is reduced, so as to reduce the deformation of the teeth, improve the impact when entering and leaving the engagement, and therefore reduce the torsional vibration and noise of the gear transmission. It can be seen from the application case that when the coincidence degree increases from 1.19 to 2.07, the noise is reduced by 4dB at 1000rpm and 6dB at 2000rpm.

For helical gear, the coincidence degree can be increased by changing the helical Angle β and tooth width b, and can greatly exceed the spur gear, but the helical Angle should not be too large, otherwise it will cause axial vibration. Increasing the number of teeth, large tooth top height coefficient or reducing the pressure Angle can increase the coincidence degree, reduce vibration and reduce noise.

Four, tooth distance, tooth shape, gear eccentricity and other gear accuracy has an impact on the noise

Gear noise is greatly affected by gear precision. An important part of reducing gear noise is to improve gear precision. For gears with extremely low accuracy, any other noise reduction measures will often encounter a futile situation. In the single error, the biggest impact is the tooth distance (basal segment or peripheral segment) and tooth shape:

Due to the modulation of various audio frequencies, the gear noise sometimes produces a variety of screaming sounds, eccentricity and other causes the continuous change of the circumference, resulting in the long period noise related to the gear rotation frequency, which is very sensitive to the human ear, especially at high speed.

The gear error has a great influence on the noise, especially in the field of high meshing frequency, where the sound pressure level is quite high and the sound is ugly.