The basic components and working principle of DC brushless motor

The basic components and working principle of DC brushless motor

Figure 1-5 shows the structure of the DC brushless motor. It mainly consists of three parts: motor body, position sensor and electronic switching circuit. The motor body is similar in structure to the permanent magnet synchronous motor, but without cage windings and other starting devices. The stator windings are generally made of multi-phase (three-phase, four-phase, five-phase), and the rotor is made of permanent magnetic steel according to a certain number of poles (2p=2, 4...). Composition. The motor body in Figure 1-5 has three - phase poles. The three-phase stator windings are respectively connected with the corresponding power switching devices in the electronic switching circuit. In Figure 1-5, the windings of phase A, phase B and phase C are respectively connected with the power switching tubes V1, V2 and V3. The tracking rotor of the position sensor is connected with the rotating shaft of the motor. 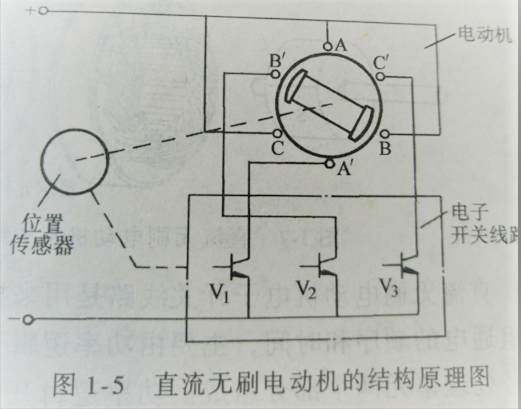 When the stator winding of a common electric, the electric current and the magnetic field generated by the rotor permanent magnet steel pole interaction and produce torque, drive the rotor rotation, and by the position sensor will transform into electrical signals, magnetic steel rotor position to control the electronic switch circuit, so that each phase winding of the stator in a certain order conduction, stator phase current along with the change of rotor position in a certain order commutation. Because the conduction order of the electronic switching line is synchronized with the rotor Angle, it plays the role of the mechanical commutator.

Therefore, the so-called brushless DC motor, as far as its basic structure is concerned, can be considered as a "motor system" composed of electronic switching lines, permanent magnet synchronous motors and position sensors. Figure 1-6 shows the conceptual diagram. 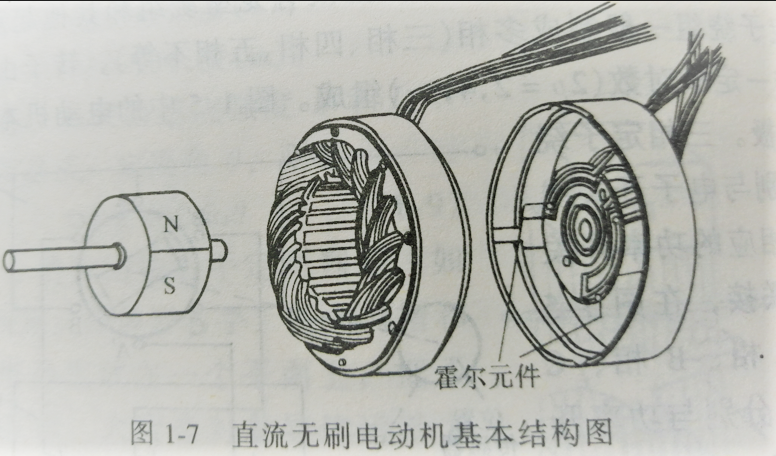 The electronic switching circuit of DC brushless motor is used to control the sequence and time of the windings on the stator of the motor. It is mainly composed of two parts: power logic switching unit and position sensor signal processing unit. The power logic switching unit is the core of the control circuit. Its function is to distribute the power of the power supply to the windings of each phase on the stator of the DC brushless motor in a certain logical relationship, so that the motor can produce continuous torque. The sequence and time of each phase winding conduction mainly depends on the signal from the position sensor. However, the signal generated by the position sensor can not be directly used to control the power logic switch unit, which often needs to be controlled after certain logic processing. To sum up, the block diagram of each major component of the DC brushless motor is shown in Figure 1-8. 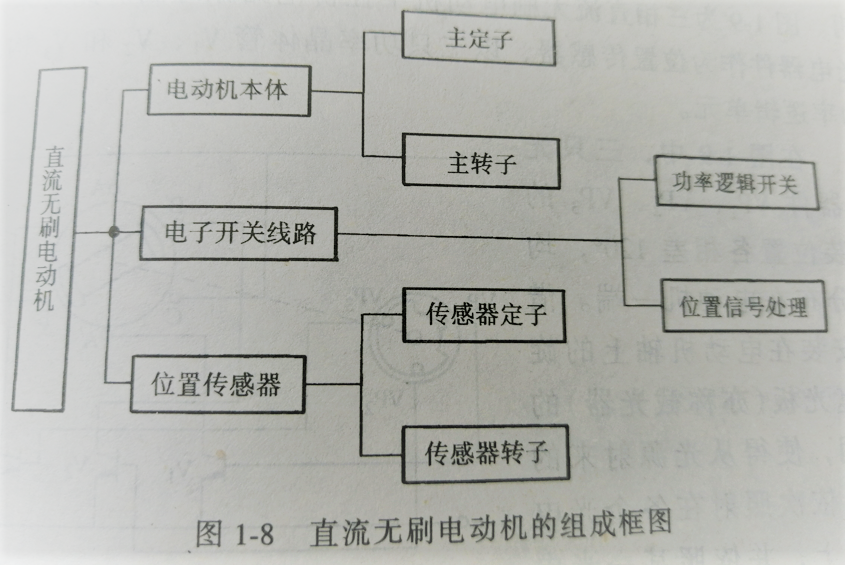 In order to explain the working principle and characteristics of the brushless DC motor more clearly, the following three phase star connection winding half control bridge circuit as an example, to be briefly explained. Figure 1-9 shows the schematic diagram of the half control bridge circuit of the three-phase DC brushless motor. Here, photoelectric devices are used as position sensors, and three power transistors V1, V2, V3 constitute the power logic unit. 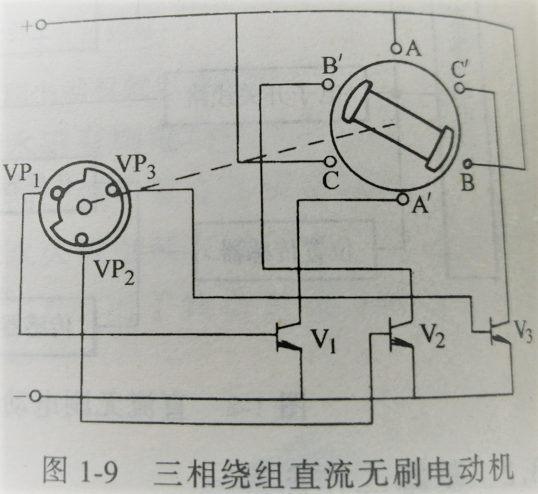 As shown in Figure 1-9, the installation positions of VP1, VP2 and VP3 of the three optoelectronic devices are 120° different and evenly distributed at one end of the motor. With the help of the rotating light mask (also called light interceptor) mounted on the motor shaft, the light from the light source is illuminated on each photoelectric device in turn, and the position of the rotor magnetic pole is judged according to whether a certain photoelectric device is illuminated by the light. The rotor positions shown in Figure 1-9 correspond to those shown in Figure 1-10A. 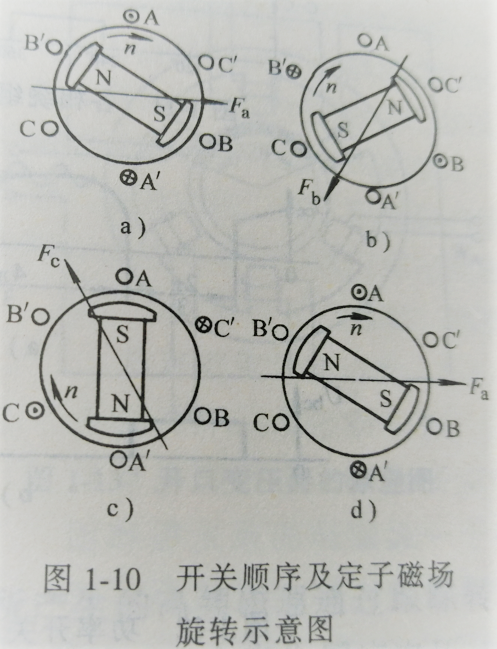 In this way, with the rotation of the rotor sector of the position sensor, the stator windings are fed phase by phase successively under the control of the position sensors VP1, VP2 and VP3, and the phase commutation of the winding current of each phase is realized. It is not difficult to see that in the process of commutation, the rotating magnetic field formed by each phase winding of the stator in the working air gap is skipping. This rotating magnetic field has three magnetic states in the range of 360° electrical Angle, each of which lasts 120° electrical Angle. The relationship between the winding currents of each phase and the magnetic field of the motor rotor is shown in Figure 1-10. Figure 1-10 A is the first condition, F ᵅ for winding A - after A 'electricity generated by the magnetomotive force. Obviously, the interaction between winding current and rotor magnetic field makes the rotor rotate clockwise; After turning 120°, it enters the second state. At this time, the windings A-A 'are powered off and the windings B-B' are powered on, that is, the magnetic field generated by the stator windings has turned 120°, as shown in Figure 1-10B. The motor rotor continues to rotate clockwise. When the winding B-B 'is powered off and C-C' is powered on, the magnetic field generated by the stator winding is powered off again by 120°, as shown in Figure 1-10C. It continues to drive the rotor around a 120° electrical Angle clockwise and then returns to its original state. In this way, the rotor of the motor rotates continuously. Figure 1-11 shows a schematic diagram of the conduction sequence of each phase winding.