Stepping motor is also called pulse motor. Based on the most basic principle of electromagnet, it is a kind of electromagnet that can rotate freely. Its action principle is to generate electromagnetic torque by the change of air gap permeability. Its original model originated from 1830 to 1860. Around 1870, it began to try to control and was applied to the electrode delivery mechanism of hydrogen arc lamps. This is considered to be the original stepping motor. In 1923, James weir French invented three-phase variable reluctance, which is the predecessor of stepping motor. At the beginning of the 20th century, stepping motors were widely used in automatic telephone exchanges. As the western capitalist powers scrambled for colonies, stepping motors were widely used in independent systems such as ships and aircraft lacking AC power. In the late 1950s, the invention of transistors was also gradually applied to stepping motors, which made digital control easier. After the 1980s, because of the appearance of low-cost microcomputers in a multi-functional manner, the control methods of stepping motors were more flexible and diverse. [2]

The biggest difference between stepper motor and other control motors is that it receives digital control signals (electric pulse signals) and converts them into corresponding angular displacement or linear displacement. It is an actuator that completes digital mode conversion. Moreover, it can open-loop position control, and input a pulse signal to obtain a specified position increment. Compared with the traditional DC control system, the so-called incremental position control system has significantly reduced cost and almost no system adjustment. The angular displacement of the stepping motor is strictly proportional to the number of input pulses, and is synchronized with the pulses in time. Therefore, as long as the number and frequency of the pulses and the phase sequence of the motor winding are controlled, the required rotation angle, speed and direction can be obtained. [2]

As a special motor for control, the stepper motor cannot be directly connected to the DC or AC power supply to work, and a special drive power supply (stepper motor driver) must be used. Before the development of microelectronic technology, especially computer technology, the controller (pulse signal generator) was completely realized by hardware. The control system used separate components or integrated circuits to form the control loop. Not only was the debugging and installation complicated, but also a large number of components were consumed. Once the control scheme was finalized, the circuit must be redesigned. This makes it necessary to develop different drivers for different motors. The development difficulty and development cost are high, and the control difficulty is large, which limits the promotion of stepping motors. [2]

There are many structural forms and classification methods of stepping motor, which are generally divided into reluctance type, permanent magnet type and mixed magnetic type according to the excitation mode. According to the number of phases, it can be divided into single phase, two phase, three phase and many equal forms.

The structure diagram of the three-phase reluctance stepping motor model is shown in the overview diagram. Its stator and rotor cores are stacked by silicon steel sheets. There are six magnetic poles on the stator, and each of the two opposite magnetic poles is wound around the same phase winding. The three-phase winding is connected into a star shape as a control winding. There are no windings on the rotor core, only four teeth, the width of the teeth is equal to the width of the stator pole boot. [1]

Because of the wide application of stepper motor, there are more and more studies on the control of stepper motor. When starting or accelerating, if the step pulse changes too fast, the rotor can not follow the change of electrical signal due to inertia, resulting in blocked or out of step when stopping or decelerating, for the same reason, it may produce super step. In order to prevent blocking, out of step and over step, and improve the working frequency, it is necessary to control the speed of stepping motor. [2] 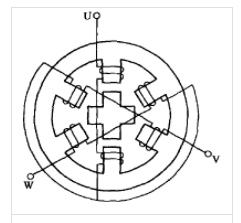